I went on a nice wine tour yesterday, seeing magnetic, iron-filled black sand beaches west of Auckland, a waterfall featured in Xena: Warrior Princess (both it and Hercules were filmed in NZ!), and the empty bottom of many wine glasses.

Before that, though, I wanted to get a little sweat in, so I ran near my place for ten days in Ponsonby, a pretty fashionable part of Auckland. So fashionable that they have a place called Wisconsin Burger, right next to this: 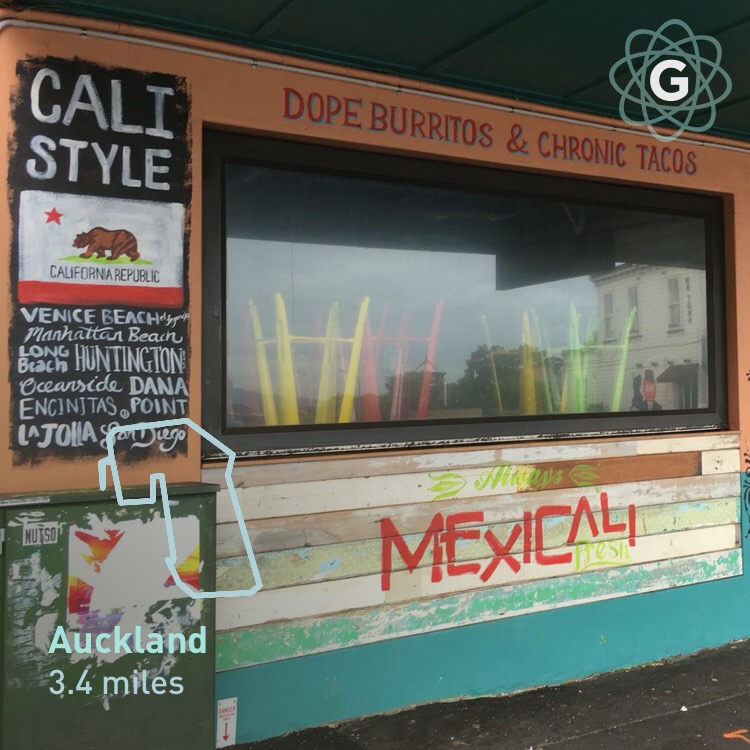 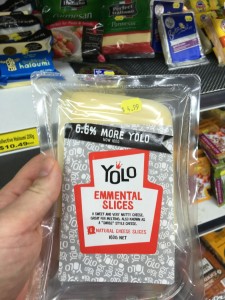 M.I.A. is nowhere in sight, though.

I’ve been neglecting my running recently, so I’ve been getting back into it lately, including doing a 10K with Diveena in Boston recently. So here’s my first semi-long run here in town: 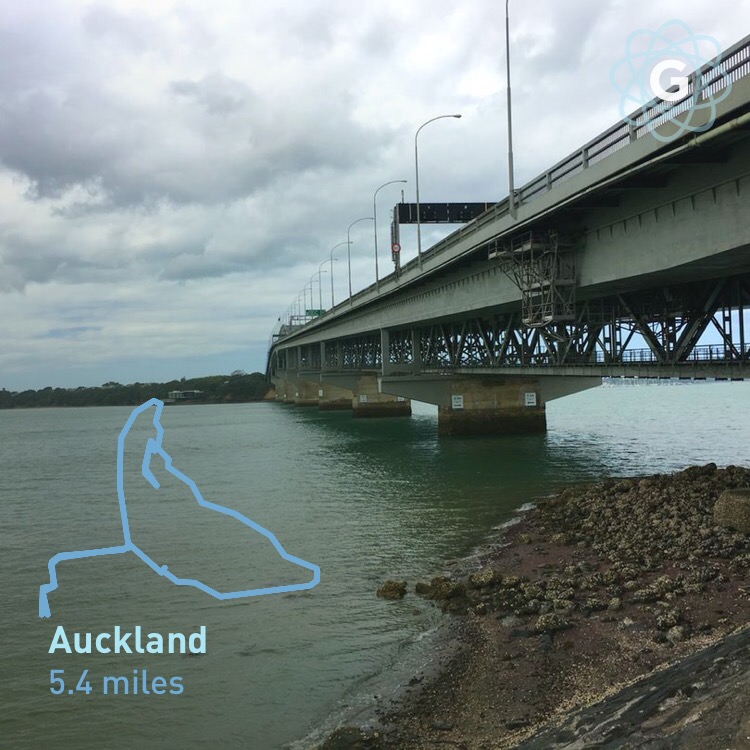 I’ve also realized how tight my hip flexors are, so I’m following some stretches in to start opening up those thighs. I recommend trying it, especially if you sit a lot – you may realize just how inflexible you really are!

I just spent the majority of a 24 hour period on an airplane. Sound hellish?

Consider this: I was in business class on the 777-ER200, and more or less had my own little cubicle, which had a chair that folder out to 180 degrees flat.

I have been in the business class lounge most of the time since I arrived in the Taipei airport. The airport is very clean, very quiet, and everyone is quite orderly. It feels less stressful than an American airport.

I’ve seen a few things here I’ve never seen in any other airport, though I’d love to learn about other airports that might have these things:

I’ve spent a long time in the Turkish airport, and this time is flying by in comparison, because:

Wifi is solid, food is delicious, and there’s issues of Time, The Economist, and Bloomberg to read if I get bored… which, trust me, I’m not, with all the work I’ve got to get done.

I asked online whether wifi on an airplane crossing the Pacific Ocean would be reliable or any good. People said it was bad. I disagree. I worked for about 7 hours on the flight, from 9am central time until touchdown around 4pm central time, and the wifi – although too slow to, say, stream videos – was perfectly fine with the text chat, file downloads, and web browsing I was doing. I was committing just like I was sitting on the earth. I’m sure your results may vary depending on weather and other unexpected technical difficulties, but I had zero problems.

It was a great experience! Everyone was nice, the food was good, and the TV screen was huge (I drifted off to bed to Ted 2, after leaving LAX at 11:45pm). The noise-canceling headset wasn’t branded Bose, and it didn’t seem as good as some other ones I’ve used, but at least they had one, which came in useful early in the flight.

Overall, it’s been a great first day of adventure … spent mostly in an airplane and in an airport lounge.

I am going to fly around the world.

I just took off from Boston on an American Airlines flight. We have power outlets so I can charge my laptop and phone, although they are both full of charge and don’t really need it. However, I want to make sure I have all the power I can, because my livelihood depends on a few key things:

These things are important to me in many ways, because I really enjoy:

All of those 3 or 4 of the things above, except that last one.

That’s what this trip is all about. Learning about the world.

Why am I going on this trip?

My girlfriend Diveena asked me on the way to the airport this morning, “Why are you going on this trip?”

I have thought about this question a few times since I first thought of redeeming 275,000 frequent flier miles on Delta to get a Round the World (RTW) ticket.

Diveena didn’t ask it accusingly, nor because she has no clue why I’d go or want to go; on the contrary, she encouraged me to go on the trip, since I had talked to her about this crazy RTW ticket long before I knew Delta was eliminating the ability to redeem miles in exchange for one at the end of 2014.

Before the end of 2014, I thought I’d save up my miles for an indetermine time in the future when I would have enough vacation to simply take off a few weeks, maybe even a month or two, and see the world. I had a vague notion that I would do this in one of the following scenarios:

I’m not sure why I limited myself to just these two scenarios, but I think it’s a variety of reasons:

Without someone paving the way to do something, it can seem very difficult to do. However, I did have a role model for this: Dima, a friend I met in Iowa who has done the very thing I’m about to do. More about him in another post, though.

Seriously, why am I going on this trip?

Although I thought about why I was going close to deciding to go, and after I got the ticket, I did not ponder this question when I started saving up for this ticket. Since 2007, when I first heard about this round the world ticket things from my good travel buddy and friend Jessica Sander, I have been saving all my frequent flier miles in hopes of earning enough for this ticket. Three things helped me with this:

So I just started slowly earning points, and after a couple years, I had enough for the economy-class Delta RTW ticket: 185,000 miles.

So earning the miles wasn’t too big of a deal to me, because I knew I was in no rush to go on this trip. Instead, I wanted to have them banked, so in case I lost a job or quit, I could take advantage of it.

But I never questioned why I wanted to do it when Jessica first told me about it.

Instead, my inherent thought was, “why would anyone NOT want to do that?”

I suppose I can think of a few reasons:

That last one is a big one for me. I traveled alone around Germany and Austria during a two week period in 2008. I spent three weeks in Europe during that trip. The first week was spent with my work teammates, doing a multi-day presentation about the software my team was building for a helicopter upgrade we were selling to our German government customer. The next two weeks I spent most of the time alone, with a few breaks to meet my friend Amanda King, who was au pairing in Austria, and some family I never before met.

At the end of two weeks traveling largely alone, I was ready to be home and see friends. I was happy to get the opportunity to do it, but I thought I wouldn’t travel alone again for awhile.

Why, then, am I doing it now? Especially now that I have a great girlfriend?

One reason is because I have a great girlfriend. That may seem counter-intuitive to most people; why would you want to not be around your partner? In this case, though, Diveena saw that this was something I really wanted to do, since:

Diveena pointed out that I am in probably the 1% of people in the world who both want to and can do a trip like this, because:

Not everyone’s partner would be understanding enough to let someone live out a trip like this, let alone encourage it. I wasn’t early thinking of going, since I thought even though I can work remotely, some of my free time would be taken finding lodging, ensuring I had good internet, and I wouldn’t be able to travel with anyone else. My company, Third Iron, just seemed to have too many things going on for this to be a good idea.

Then I thought about the example my friends with children point out: there never is a right time to have kids. There is always a reason or excuse to not have them: we’re too young, our career is too overwhelming, we want to do too many other things, and eventually, we’re too old.

I thought about it some more, and since I started Third Iron in 2011, I have worked while visiting:

…and I’m sure a few more I’m not recalling.

I’m no stranger to working on the road. In fact, getting focused time to work on one single thing while I’m on an airplane is – however perverse this may sound – a joy to me. Throughout my working life, whether working for KB Productions, Rockwell Collins, or Third Iron, I’ve relished the time on an airplane as an environment where, free of anything else to do, it’s just me and the screen in front of me. I enjoy chatting up a friendly person in the seat next to me, but since a comfortably chatty person can be somewhat rare on airplanes, I generally look forward to them as a time to get something done… such as writing this very piece you are now reading. I believe I’m somewhere over Pennsylvania at the moment.

Seriously, you still haven’t said why you’re going on this trip

Well, I kind of did:

I want to see more of the world up close.

I feel every place has many lessons to teach.

Every person you meet has a unique story, and can help you learn something new.

Putting yourself into an unfamiliar environment challenges you to reconsider what’s right, what’s pragmatic, and what’s possible.

What better way to put yourself into an unfamiliar environment than literally leaving the country in which you’ve grown up, and placing yourself into a place where people have spent generations growing up and living differently?

Some of the lessons I’ve learned in the past from traveling:

So there’s another, and perhaps the most important, reason for going on this trip: to add to my list of life lessons.